Many people buy cars that fit their personalities, or they buy cars in order to make a statement. This is especially true for celebrities. Whether they’re using their cars to say “I’ve made it”, “I care about the environment”, or “I’m a tough guy”, the right car can make or break a star.

Most celebrities (especially “new-money” celebs) go for broke and end up buying the flashiest and most expensive luxury mobiles out on the market. Kim Kardashian, for example, owns a Bentley Continential GT with monogrammed seats, a Mercedes G63 offroader, a Ferrari 458 Italia, a Black Range Rover HSE, a Rolls Royce Phantom and a Rolls-Royce Ghost. She has reportedly spent over $1,200,000 on cars alone in the last 3 years. 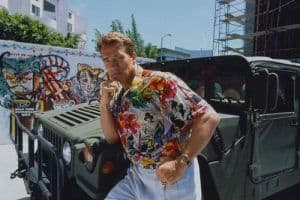 For many years, a staple of the celebrity: a Cadillac Escalade, has sold like hot cakes from Hollywood to New York. These SUVs are perfect for celebrities and their posses to get from place to place in privacy. The vehicle is luxurious enough to even appear in many music videos of rappers and R&B singers. Arnold Schwarzenegger has been sporting all different models of the Hummer for over 15 years now, and it only contributes to his macho man persona.

Cars can even give a celebrity a way to look more “laid back” or “down-to-earth”. Take Justin Timberlake, he has been seen driving around in a Jeep Wrangler. Rob Dyrdek drives a Chevrolet Tahoe and Kristen Bell drives a Chevy Volt. 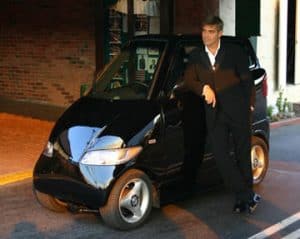 Many celebs use cars to make a political or environmental statement. A new trend has some major celebrities like Leonardo DiCaprio and George Clooney buying Hybrid cars to show that they support clean energy and saving the environment. The most common car in this category is the Toyota Prius, but George Clooney has recently purchased the 2 seater electric Tango 600.

While most celebrities are used to getting things for free, there is no such thing as free car insurance. Most insurance companies treat celebrities just as they would treat anyone else, and their car insurance policy premium would depend on the same things as all the others: type of car, driving history, etc.